We've been training now for a month. We've all encountered struggles. Today it was all 13 months are already worth the struggle because I made orange juice! Silly sounding perhaps... Let me explain.

A family I watch was out of juice and the girls asked for the usual orange juice. There was a bag full of oranges for juicing. Their juicer is manual though. My whole life, my family has treated me as the weak one who wasn't strong enough to do it for herself. I usually wasn't strong… Continue

It's normal in the dojo to do kata, practice our basics, even mount each other to practice a grappling self defense. I forget how these seem to other people...

My car wouldn't start Sunday. Thankful for AAA, I called for roadside assistance and had the usual hour long wait. What to do for an hour? Well, I hadn't practiced kata yet... the sidewalk was extra wide... time was plentiful... why not? So I did.

About 40 minutes in, a couple riding by on their bikes stopped to ask… Continue

Another week is gone. Chirstmas has come and gone. The new year is close behind. This next year proves to be a good one. So far I'm keeping apace with my running, pushups, crunches, squats, kata and kindness.
This new year should prove to be one of the greatest challenges of my life. I
am changing schools, starting at a real university (Finally!) and am continuing
to train apace with my runnning and workout. Though this challenge will be
great, I'm glad…

I had planned on posting this on Friday, and then Christmas happened.

Successes the previous week included persisting with the routine during the darkest days of the year, and overcoming some deficits after a very social day with dinner guests. Adjustments to basics made during class have been incorporated to practice at home, and I feel my balance improving with the kicks that require it most.

I've been able to redirect, at least a little bit, the weasel mind, who likes…

Week 4 And a Merry Christmas

Days away from the first month. Doesn't feel like it's been that long. Things are starting to feel like part of a routine, and don't feel so much like I have to make time for it. I think that's my biggest accomplishment so far.

This last week has been tough. Where to start!

Old injuries have been forcing creativity in the physical requirements. An unexpectedly busy week provided the perfect excuse AND reason to slack off. Between failing creativity and the unfriendly schedule, my miles, kata, push ups and sit ups have fallen behind, in that order. Something needs to be done. Though I'm not sure how yet...

An extra 50 sit ups and push ups a day will help. Longer sessions on the elliptical are… Continue

An Invitation to RUN RUN RUN! ... or WALK WALK WALK!

I'm trying to get a team together for The Relay.

NOT competitive, just for FUN!

Here are the options:

Run: 199 mile relay from Calistoga to Santa Cruz. 12 team members, each person runs 3 legs that are from 3 - 9 miles with about 50 miles between each leg. The registration fee is $80 per…

Definitely getting stronger. I say that for two reasons: My push-ups are getting easier, and, more importantly, 150 push-ups a day doesn't feel as scary. Still scary, just not as scary.

I had some rough days this week. Fighting off a cold by leaving work early for a nap so I'd have the energy for karate class :) I noticed though, that even if I felt a bit blah on my way to calss, I felt completely reenergized by the end of…

Missing Sacramento Girl: Can you help?

I've contacted Brie's Father to see if there is anything that we can do to help. In the mean time, here's the alert. 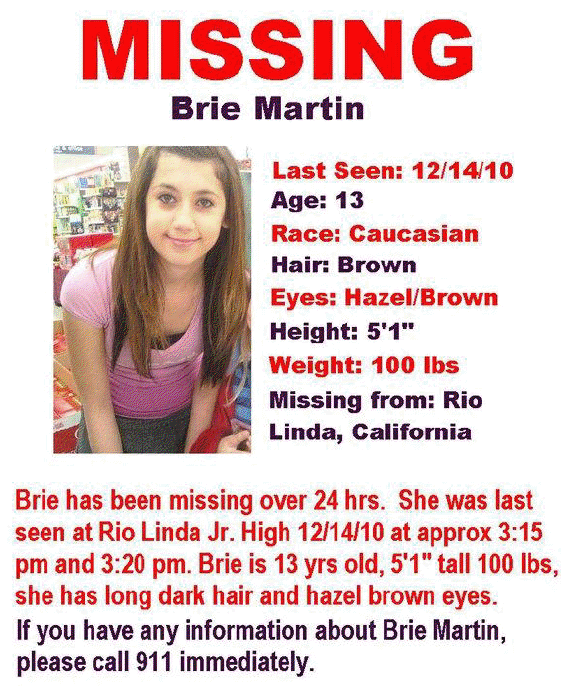 My body is saying hello to UBBT Week 3

This week's overarching theme is overcoming resistance from my lizard brain, which doesn't like to be uncomfortable, and taking the long view. It was hard to get up a few days this week--my body definitely wants to hibernate for the winter.  But, I'm enough of a data geek for the spreadsheet tracking to motivate me. I have to keep filling in those cells! The wake-up calls--crickets from my phone so as not to wake up David--has been effective most days.

There are some areas I need to…

My work out routine has been the easiest. I have been keeping on track! Except for the rain hindering my walking a bit. I have started 2 community projects and I wanted to thank Lisa Clark for her contribution of 31 articles of clothing for my "Christmas in your closet drive" my goal is 1,500 articles of clothing and I have so far accumilated 478 articles that have been donated to local communities as far as Florida. So if anyone else would like to contribute, just go thru your closets, kids… Continue

This is what I have done 1,750 push-ups 1,750 sit-ups 35 acts of kindness 15 miles of running or biking read two books 45 repetitions of my Kata weekly online journal entry's So far no quitting. …

This is what I have done

So far so good. I'm keeping up with my lunch time workouts and I continue to be "motivated" (read taunted or teased) by my cell mates at work. The white board in my cubicle is a special little alert to my neighbor who apparently doesn't like odd numbers. Every now and then I have to do 10 push-ups or sit-ups just to make the white board full of even numbers. Ha.

I think I've started up a little running group at work, too. Have 4 or 5 people a day…

End of week 2, first full week. Well it hasn’t been so bad. I think it’s going rather well actually. So far I’ve kept up with the push-ups, crunches, squats and miles. I’m a little behind on my kata, but only by a pinch. I expect to be caught up this week. Finals are over. That was the hardest part of maintaining the schedule last week, trying to squeeze in running and exercise while also keeping up with my studying. It’s amazing to know that I’m actually keeping with the program. This is…

My mom has joked about my selective hearing tor years. I would be so consumed by a task that nothing else existed. Not her voice, dinner, the cat jumping onto the table, my cup spilling, nothing. This might be considered focused. But lately I'm learning a different type of focus.

In yoga, the instructor guides the class through 26 poses with dialogue and encouragement. Today's instructor is very detail oriented. She reminds us to direct our gaze, engage our abdominal muscles, relax… Continue

Lisa Spagnolo's journal mirrors my own thoughts. It was aptly titled "Repetition and the New Normal." My own life is restructuring. There is a new 'normal.' Its not just the UBBT requirements.

Financial ventures are new and more satisfying than before. I've wanted to nanny for a long time. Two families have recently presented the opportunity. Its developing deeper patience, greater understanding, inspiring laughter and meeting the bills. What could be…

Repetition and the New Normal

Over the course of my working life as a manager, I have occasionally heard the question "when are we getting back to normal?" The answer is usually "this is the new normal." Time passes, and whatever change that was met with resistance is often incorporated into routine--until the next changes come, and they come fast these days.

The Ins and Outs of Breathing

The Ins and Outs of Breathing I received an e-mail from a student today asking about breathing.

Why do we breathe in through the…

Day 6 was hard. It made waking up today, Day 7, tough as well. Bodily aches and sore muscles are very satisfying though. Its like they're saying, "You survived yesterday's challenge. Get ready for today!" There was a lot to look forward to today.

I have started watching some very cute girls a couple days a week. They were the first chunk of the day. The family does not watch a lot of tv, and board games are a favorite activity. So on top of knocking out the 3 mile requirement walking… Continue