On Saturday I competed in a Northern California GSKA Tournament. As someone that trains in traditional karate I've often shied away from open tournaments. I've had bad experiences in the past--everything from bad sportsmanship to questionable judging. This year however I've made it a goal to compete at 10 events and decided that I'm going to go in without old negative thoughts. Also competing along side me was one of my junior 11-year old students.

I helped judged throughout the day. I regulaly hear complaints from black belts who just despise judging at tournaments, but I've always enjoyed. I particularly liked helping with the kid's divisions. Because of my judging responsibilities, I wasn't able to catch all of my students sparring and kata, but what I did see made me proud. He hung in there against a very tough opponent in his continuous fighting division. Despite getting winded and taken down, he showed heart and finished the match strong against a bigger and much more advanced student, taking 2nd place overall. 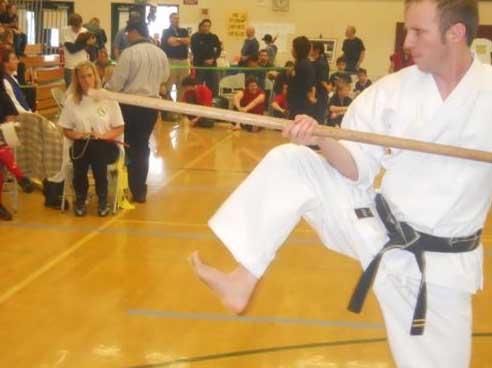 I competed in two sparring divisions (point and continuous) and learned a lot from both events. Putting aside old habits and thoughts has really helped me open my mind to the lessons that I can learn from the ring as opposed to blaming judges or rules. I also competed in two kata divisions--empty hand and weapons. There was a solid turnout of competitors in our traditional kata division which is always nice to see at an open tournament.  Tying for first place, we had to demonstrate our forms again and I was able to meek out a win over a very solid Goju-Ryu karate-ka.

From there, I was invited to compete against all the other black-belt division kata winners. It's an interesting contrast of styles when you see a traditional karate kata being demonstrated against open xma-style forms with music and gymnastic type flips and moves. Any time I've competed in kata though, I don't even see it as a competition. I've always gone in with the thought that it is just an opportunity to demonstrate our Isshinryu karate. I don't even look at my own score, let alone the scores of the other competitors. 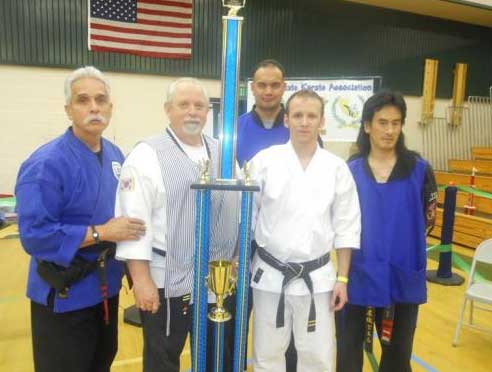 Comment by Mike Oliver on January 31, 2011 at 10:38am
@Marjorie: Thanks for spreading the word! I will have a post summary soon as well as some video to share.

Comment by Marjorie Schultz on January 30, 2011 at 10:48pm
Congratulations Mr. Oliver on your achievements at the tournament! I'm looking forward to reading your posts on the Women's Self Defense class. I announced the class at my Women Accounting group and there was some interest with a few of the women. I hope they were able to make it.

Comment by Susan Bitar on January 25, 2011 at 12:34pm
Congratulations! And thank you for your kind words about Aaron.

Comment by Lynn Elam on January 22, 2011 at 8:34am
I can tell you, watching Mr. Oliver perform any particular kata can be described with one word..... Breathtaking!!

Comment by Lisa Spagnolo on January 21, 2011 at 10:40pm
From all reports and seeing the trophies lined up, we better make sure to catch the next tournament!

Comment by Lisa Clark on January 20, 2011 at 2:14pm
For the record, you broke the tie by .1 and earned the championship by .01 above the twirling bo staff young man. (Our little group was watching the scores from the bleachers.)
All the demonstrations we saw were excellent. Some did feel like gymnastics routines; so it was nice to see traditional kata win out over the showier styles, especially from our dojo.