Sorry, I haven’t got around to writing in a long time hopefully I didn’t lose any followers. To give you a recap I’ve finished more than half of my test and I’m at exactly four months in. I started middle school so it’s like having two jobs at once working the same hours and no holidays. It feels like everything I’ve done has been halfhearted and I’ve lost my motivation. I went searching for it; I even put up ads for lost ‘effort’. Ok, I didn’t lose it too much - maybe just a bit. But I will be starting November fresh and during these last two months I will get back in the groove. I stayed up on my numbers, though sometimes I feel like the test is more about suffering and getting numbers then it is about getting better - a test of mental strength.

Back to the recap - I was able to maintain good grades which happens to also be part of the Black Belt requirement. I started the year with a D in math on the first test as everyone flunked since we’ve never taken a Common Core math test. For a while PE was my highest grade because it’s about participation. To get an A you have to change into PE cloths, run an under 13 minute mile and know all the rules to whatever game. I did 37 pushups and beat everyone in my class but this one guy did 58 from a different class. I ended the quarter with all A’s - even in my advanced Language Arts, Science, and History – and it’s a lot harder to keep up with school work with the Black Belt test. 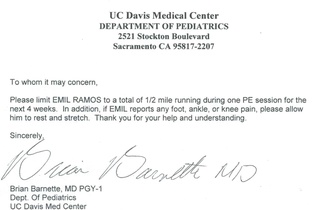 I went to the Doctor today and was told that I need to stop sparring and running for a few weeks. He said I have “overuse syndrome” - a syndrome he made up on the spot after examining my feet, ankles and knees.  He told me I needed to correct my form – which was funny and probably true. I got a note for P.E. and I’m not supposed to run for longer than ½ mile at a time to avoid putting pressure on my ankles and knees.

So instead of sparring I will keep practicing upper and lower body basics. Because if you have ever been in class with me you know I can’t tell a Sokuto Geri from a Jodan Tegata Uke. (A Jodan Tegata Uke is an open hand block blocking the head - see I am getting better.) I worked on it all this weekend and now I know almost all of them, like number 12 upper body – it’s Gedan uh… Tsuki, well um Gedan Tsuki Barai, let me think it’s something like… let me get back to you later.

Hurrah, Mr. Ramos.  Glad to hear from you again.  Your insightful journal entries give us a view of the progress and regress you make.  We have confidence you will reach your goal and live to tell about it.